Israel celebrates 69 years of independence this year – and here in Ariel, we’re celebrating all week long.

Festivities began on the Friday before Yom Ha’atzmaut (Independence Day), April 28, with the traditional flag dances from Ariel’s kindergarten students (ages 3-5). Over 900 students from 33 kindergartens participated. Mayor Eliyahu Shaviro addressed the crowds of adoring parents during the ceremony.

stories, and not a dry eye was found during the solemn proceedings. Click here to see more photos from the ceremony.

The next day, on May 1, Independence Day evening, the City of Ariel began celebrations with both a concert extraordinaire by Israeli pop sensation Sarit Hadad and a prayer and singing session on a separate stage. Mayor Eli Shaviro addressed both crowds and even joined Sarit onstage!

Then, on May 2, the day kicked off with the annual Yom Ha’atzmaut Bike Ride throughout the city, with cyclists of all ages joining the fun. 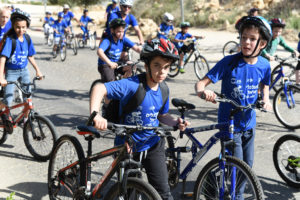 In the late morning, Ariel’s local martial arts, dance, and gymnastics teams took to the stage and performed for hundreds of young families at the annual Independence Day street fair. Click here to see more photos from Israel Independence Day.