Nine months later, we sat down this week with the Center’s Director, Shir Avikassis-Arbiv, to see how the institution has evolved.

“The Young Adults Center is a relatively new concept in Israel – it’s the 11th year of [the franchise’s] operation,” Shir began. “The Center specifically caters to ‘young adults’ – ages 18-35.”

“In Ariel there was a very strong demand for such a place and we had to push hard for it to be built,” she added, noting that with the help of American Friends of Ariel, “we managed to get a special donation just for the building itself.” 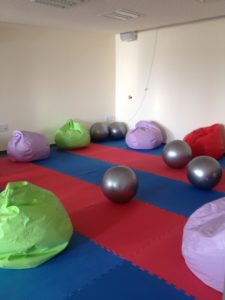 “The first is social involvement and community – connecting people, creating a sense of shared space – and for that, right now we’re looking to make a Young Adults’ Board, a youth parliament, which would bring to our attention all of the issues young adults face here in Ariel in the public sphere.”

“The second is the entrepreneurship sphere – which we established in a partnership with Ariel University and Dr. Eleonora Shkolnick – which include demonstrations and workshops we host here [in conjunction with the Field Center for Entrepreneurship – ed.]. […] the general public is invited to participate in lectures about entrepreneurship.”

“The last sphere is what we would call the Life sphere: everything that’s connected to life in general between these ages [between 18-35 – ed.], from recently released IDF soldiers or even high school graduates who finished army service or school […] to young parenthood.”

But Shir’s focus, for the time being, is on young mothers.

“I simply know from my own personal experience at home – I don’t have kids yet, but I know a lot of people who do – that during maternity leave, when you are on the biggest high, you’re also the most alone – you’re sitting at home when often your friends and family are at work or school,” she said. “So the idea is to give some space for new mothers to breathe, but also to allow them to spend some quality time with their children.”

To that end, the Young Adult Center launches its new “Mommies” program this week, for young mothers currently on Israel’s mandatory maternity leave.

“They can come here – there will be a certified Child Development expert who’s running the program – and we’re hoping to have 5 meetings.”

Shir, for her part, says that the Center has become a meeting place for all walks of life.

“I get to meet a lot of people – people of all types and varieties, not even from Ariel, but also from visiting delegations.” 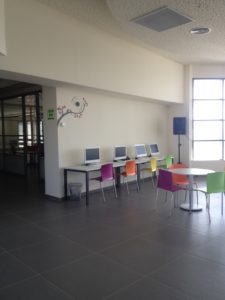 You see everything – you see mothers with their children outside at the playground [next door – ed.], and fathers too; you see people looking for places to sit and work; and people volunteering their time for their own reasons.”

Ariel residents are enthusiastic about giving their time, she added. Some 90% of the workshops given at the Center are free contributions from volunteers.

“We also had someone who volunteered to give tours for free, we have a doctor who’s giving lectures for new parents for free …. you see the best of people here. It’s very special.”