Friends of Ariel had the pleasure of welcoming a StandWithUs study group consisting of Birthright alumni from Australia and South Africa who are active in their communities and campuses in countering anti-Israel propaganda. StandWithUs is an Israel advocacy organization whose mission is to counter misinformation about Israel, so prevalent in discourse about the Arab-Israel conflict. The tour of Ariel was aimed to provide them a more accurate picture of life beyond the Green Line, which is often the subject of extreme distortion in the media and on college campuses.

The first misconception that the tour of Ariel addressed was that boycotts serve Palestinian Arab interests. A tour of the Lipsky factory at the Barkan Industrial Park revealed how industry unites Israelis and Palestinian Arabs through peaceful mutual productivity. CEO Yehuda Cohen pointed out that his factory does not discriminate between Arabs and Israelis, and that they all work in a spirit of harmony, with wages based on Israeli standards and merit. Boycotts targeting businesses beyond the Green Line damage the livelihoods of Arabs and Israelis alike. The second misconception was that Israeli settlements consist of trailers and lone religious extremists. Ariel is a diverse, largely secular city equipped with the amenities found in every major city. They toured the city’s landmarks: a Center for the Performing Arts, the Lowell Milken Family Sports and Recreation Complex, and, of course, Ariel University. Ariel is considered a consensus city which no Israeli government would cede in the event of a land-for-peace deal.

Given the horrors of apartheid in South Africa, the South Africans in the group were particularly sensitive to misuse of the term “apartheid” to describe Israel. Standing on a lookout overlooking the neighboring Arab town of Salfit, they learned how Jewish communities in Judea and Samaria did not always require fences. It was after the Oslo Accords granted the Palestinian Authority weapons and limited autonomy that Arab and Jewish communities became more segregated, in large part due to the Palestinian terrorists using their guns to target their civilian Jewish neighbors. 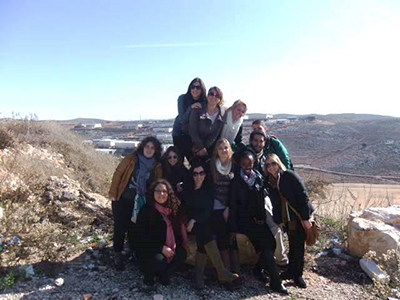 A quick stop at the makeshift camp for evacuees from the Netzarim community in Gaza brought to light the challenges of incorporating theories of population displacement in the Arab-Israeli conflict. Eight years since the evacuation from Gaza, many of the displaced persons have not yet built permanent homes. The cost of even a partial withdrawal from Judea and Samaria would exceed Israel’s annual budget, not to mention the counterproductive nationwide stress that it would cause.

We trust that the group emerged better informed as they serve as ambassadors for Israel in their communities.