American Friends of Ariel was honored to host our most dedicated supporter, Lowell Milken, and family in Ariel this month, for a fun and meaningful two days of activities around the city.

Lowell Milken and family visited Ariel as part of an Israel trip in honor of his grandson Jake, who celebrated his Bar Mitzvah earlier this month. It was an honor for us to show the Milken family – who have been involved with the City of Ariel since 1987 – all of the progress and new development since their last visit several years ago. 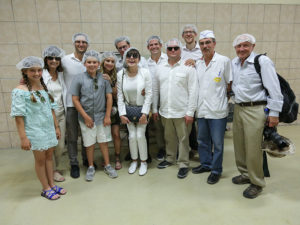 Then, on Monday, the entire Milken family met with Avi at the Ariel Industrial Park and began their day with a tour of the Achva factory – the home of Israel’s main provider of halva (a Middle Eastern sesame-based dessert), tahini, and baked goods. The family had a blast seeing how everything is made and getting various taste tests of Israeli delicacies.

From there, the group arrived at Bernard Milken Elementary School, where they were welcomed by Mayor Eliyahu Shaviro, a delegation of English-speaking fifth-graders and two songs from the school choir.

Over lunch, the Milken Elementary staff showcased some of the school’s recent Art and Science projects and congratulated Jake on his Bar Mitzvah. They then showed the Milken family their Robotics lab – home to our K-12 Robotics program – and the Science and Nature Park on school grounds.

In the afternoon, the group headed up to the Ariel Pioneers Museum and Ron Nachman Legacy Center, for a screening of a film about former mayor Ron Nachman’s life and a conversation with Dorith Nachman, the late mayor’s wife, and her children and grandchildren. 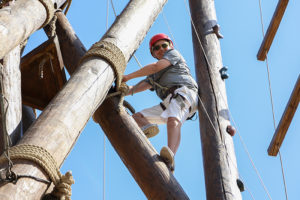 Afterward, the group headed out to the Ariel National Center for Leadership Development (ANCLD) – where Lowell Milken’s grandchildren, Jake and Marin, climbed the Alpine Tower in record time.

From there, the group left to discuss new plans for the expansion of the Lowell Milken Family Sports and Recreation Complex, which the Milken family was instrumental in building and which was opened to the public in 2008. 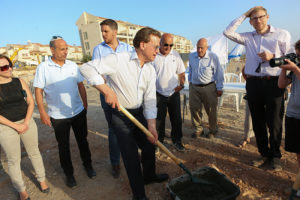 Following a light dinner at the Café Café inside the complex, the group arrived at the site of the future Moriah neighborhood gymnasium and Nachshonim Elementary School Campus, for a short cornerstone-laying ceremony.

The night ended with the Honoring Excellent Educators Award Ceremony at the Ariel Regional Center for the Performing Arts – where the family witnessed the fruit of the program the Milken family has funded for decades to motivate excellent education in Ariel. (For more about this year’s ceremony, read more here.)

We thank the Milken family for their ongoing support of Ariel and for truly building the city from the ground up. We look forward to hosting you again sometime soon!

For more photos from this amazing day, click here.