Members of US Congress Plant Roots in Ariel Seven Members of the United States Congress spent the day in Ariel and the greater Samaria region on November 4, 2013 to get a firsthand look into the City of Samaria and the role it plays in securing Israeli and American interests. The tour was organized by the US Israel Education Association (USIEA) which works to strengthen the US-Israel relationship through innovative educational opportunities for Members of Congress. Participants included Robert Aderholt (R-AL), Michele Bachmann (R-MN), Jim Jordan (R-OH), James Landford (R-OK), Mike McIntyre (D-NC), Ted Poe (R-TX), and Steve Scalise (R-LA). They were hosted in Ariel by American Friends of Ariel and its director, Avi Zimmerman.

Heather Johnston, director of USIEA, led the group toward the grave and memorial site of her good friend, the late Mayor Ron Nachman, atop the Ariel National Center for Leadership Development (ANCLD) overlooking the City of Ariel. With its array of obstacle courses designed to develop leaders through physical and mental challenges, as well as inspiration taken from Biblical legends, ANCLD reflects the spirit of Ariel’s creation. From the lookout, Ron’s wife Dorith regaled Congressmembers with the story of Ariel’s difficult yet rewarding transformation from a mountain of rock into a thriving city. 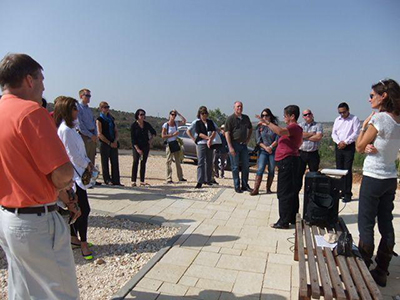 A meeting with the Chancellor of Ariel University, Yigal Cohen Orgad, revealed to the Members of Congress how American policy not to fund educational institutes beyond the Green Line actually inflicts harm on America’s security interests, as well as the interests of improving the quality of life for Palestinians. He outlined several joint projects between Ariel University and Palestinian and American educational institutes that bear directly on American homeland security and environmental health in Samaria.

A look into the potential for coexistence and peace in the region was brought into focus at the Barkan Industrial Park where the Congress members met with the factory manager of the Lipsky Factory, Ofer Alter. At the factory, Israelis and Palestinians work in a spirit of harmony and equality to manufacture an array of plastic household products. While the CEO was offered to move the factory within the Green Line to avoid selective discrimination against products made in Judea & Samaria, he insisted on remaining in Samaria because he believes the factory brings hope and sustenance to all peoples of the region. 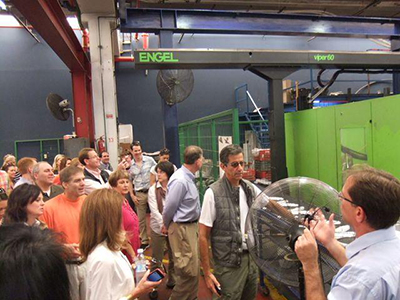 At a festive lunch at Café Café located in Ariel’s Sports and Recreation Center, the Members of Congress had the opportunity to meet the new Mayor, Eli Shaviro, and hear about plans for continued enhancement of the City of Ariel. Chief Foreign Envoy of the Yesha Council, Dani Dayan, briefed the delegation about security and ethical considerations in achieving peace. Entertainment was provided by the Ariel Dance Troupe of teenage performers.

The lawmakers planted roots in Ariel, literally. At the foot of the Ariel National Center for Leadership Development, they deepened their connection to the land of Israel by planting a new vineyard, reflecting Jeremiah’s prophecy that “you shall yet plant vines on the mountains of Samaria.” 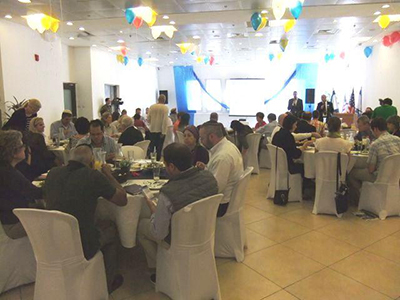 Wine production in Samaria has flourished since Jewish return to the area, which they got to see up close at Har Bracha, north of Ariel, where they were greeted by the head of the Shomron Regional Council, Gershon Mesika; CEO of the Shomron Liaison Office and Council for Public Diplomacy, Shai Attias; and Yossi Dagan, deputy director of the Shomron Regional Council. Overlooking the city of Shechem (Nablus), they also met with Christian volunteers who live on Har Bracha during the grape planting and harvest season to assist local wineries.

But the tour wasn’t only about the good life. During bus rides throughout the region, they got to see firsthand how the Oslo Accords shaped the local landscape, including the separation of the land into Palestinian and Israeli-controlled areas, as well as flashpoints of conflict. They ended their day in the capital of ancient Israel, Shiloh.