Pastor Tom Doyle, author of books about Christian Zionism and Director of Middle East Strategy of E3 Partners Ministry, and his wife, JoAnn, led a delegation of 15 evangelical Christians from Texas and Arizona on October 7, 2013 to deepen their understanding of and friendship with the City of Ariel. This was Tom’s 52th trip to Israel and the first visit for his 81 year-old mother-in-law.

At the Ariel Center for Performing Arts, Avi Zimmerman provided an overview of the history and treasured location of Ariel along the Path of the Forefathers in what is traditionally called the City of Joshua for its proximity to Joshua’s tomb.

The modern pioneer of Ariel, the late Mayor Ron Nachman, became the focal point at the Ariel National Center for Leadership Development, where Ron’s wife Dorit joined the group at the grave for words of encouragement. 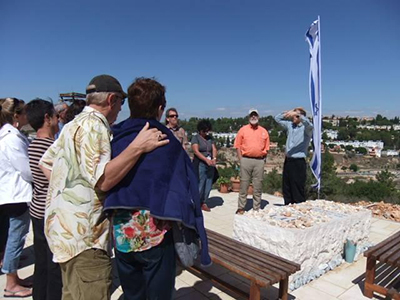 During the hike up to Nachman’s grave, the group worked up an appetite for lunch at Café Café located at the Ariel Sports and Recreation Center. They nourished themselves with dairy delights as well as informal discussions about the significance of Ariel in Israeli life.

At at the hilltop vineyard planted in the memory of Brenda Wygant of Faith Bible Chapel in Colorado, participants connected to Jeremiah’s realized vision that gentiles “shall yet plant vines on the mountains of Samaria.”

The final stop at the Randolph A. Hearst Sheltered Workshop demonstrated that the real fruit of Ariel are its people. Here, the elderly and handicapped find meaningful employment and social activity through packaging, assembling and producing an assortment of electrical equipment. 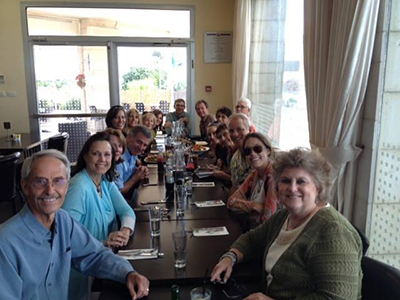 We look forward to welcoming JoAnn and Tom on his 53th visit to Israel so that they and their friends can continue to take pride in the flourishing City of Joshua.