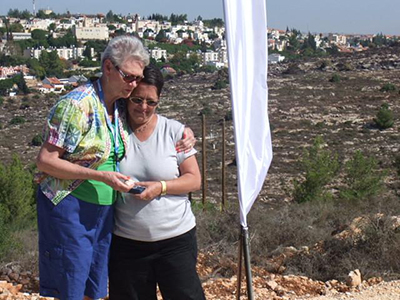 The friendship between FaithWalk International and the City of Ariel that developed years ago with the late Lt. General Paul Cerjan and Ron Nachman has deepened through this day. Since Paul’s passing last year, Paul’s wife Pat, his son David, and David’s wife Amy have carried the torch of friendship, leading annual delegations to Ariel. Paul’s other son, film editor Tim, was on hand to diligently document the trip.

October 13 marked the first visit in which both Paul and Ron were sadly absent. But Ron’s legacy of leadership that Paul honored and respected was felt throughout the tour. The delegation of 26 people, from across the US, experienced that legacy with a tour of the Ariel National Center for Leadership Development, where motivated participants breezed through the low ropes course designed to build teamwork. They trekked up to Ron Nachman’s grave where Pat and Dorith Nachman shared words of comfort over their respective losses. But looking out into the distance, they were encouraged by the man who “wove dreams into reality,” as it is engraved on Ron’s tombstone. The sprawling city, upcoming mall, and even a new neighborhood in view from Ron’s grave reminded FaithWalk that Ariel lives on proudly and sturdily.

In what has become tradition for FaithWalk, the delegation went up to Antenna Hill, which was set up to guard Ariel from indiscriminate attacks emanating from the neighboring Arab town of Salfit. But they also learned about the once positive relations Ariel had with Salfit, as well as the cooperation which still exists today. Almost every household in Salfit includes an employee at a nearby Israeli factory.

At the start of their tour, the delegation was treated with the always delightful performance by the Ariel Dance Troupe at the Eshel HaShomron Hotel. We look forward to meeting the participants in Washington DC when the Troupe performs there right before Thanksgiving 2013.