Ariel has hosted a number of student delegations of The Olive Tree Initiative (OTI) over the years. OTI is a university-based organization that promotes conflict analysis and resolution through experiential education in Israel for a multi-ethnic group, including Jews and Muslims. This time, on August 28, at the request of OTI organizers, delegates consisting of students and administrators of UCLA and UC Irvine were given the opportunity to meet Ariel residents through home hospitality.

Residents were delighted to welcome the delegates to their homes for lunch. OTI focuses on 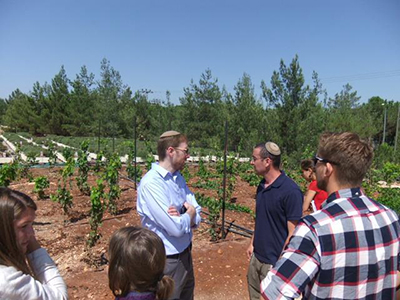 understanding life in Judea and Samaria, in both Jewish and Arab areas, within the context of the geopolitical conflict. What better way to get an appreciation of the diversity and origins of the City of Ariel than to meet with everyday residents who represent a broad range of the political spectrum as well as varying reasons for settling in Ariel.

The delegation split into groups and were hosted by Arik Dushi, owner of Abu Dushi Hummus; Orit Arfa, director of communications/visitor services at American Friends of Ariel; Ofira Sweeden, administrative director of the Ariel Development Fund (ADF); Tami Zilberstein, an evacuee from Gush Katif who lives in the Jewish Gaza refugee camp in Ariel; and Masha and Dora Litvak, the founders of the talented Ariel Dance Troupes.

Ariel native, Arik Dushi, welcomed the group to the popular, local hummus joint he runs with his Palestinian partner and good friend, Faisel, who lives in the nearby village of Kifl Haris. Over Faisel’s delicious hummus, Dushi shared his belief that peace for the region starts in Ariel since the city, much like its hummus, serves as a bridge between Israelis and Palestinian communities. He offered to take the group to visit Faisel’s family in Kifl Haris one day.

Orit Arfa, serving pizza and fruit salad on her patio, shared her belief that creating a “state” for Palestinians is less morally and practically desirable than creating the conditions for freedom and prosperity for individuals, Jews and Arabs alike. Participants engaged in intellectual discussion and debate on the moral right of Israel and a Palestinian state to exist as well as the importance of individual rights over collective, nationalistic claims.

Tami Zilberstein, an evacuee from the Jewish community of Netzarim in Gaza, welcomed the guests to a place she calls home: the caravan in a “trailer park” designated for her community. She spoke about her arrival in Ariel with members of her community when they had nowhere to go upon their evacuation. Mayor Ron Nachman welcomed them with open arms, and their future semi-detached home, now under construction, is visible from the camp. She believes evacuating Jews from the land of Israel breaks not only the spirits and lives of the people but the covenant that God made with the Jewish people. 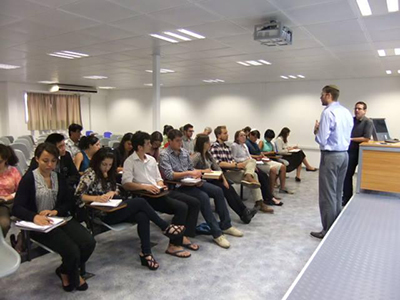 Ofira Sweeden came to Ariel over 20 years ago in search of more affordable living. She believes she’ll never be asked to leave her home, but in the hypothetical scenario of a surrender of Ariel, she’d do everything in her legal power to fight the decree but ultimately accept the decision of the Israeli people. Peace, she thinks, won’t be possible as long as Palestinian groups continue warring over tribal and religious supremacy.

Masha Litvak, founder of the Ariel Dance Troupe, shared the story of her and her mother’s immigration to Ariel from the former Soviet Union, where dance was central to the cultural community and their lives. Today, the mother-daughter team is grooming the dancing talents of Ariel’s children and teenagers through the award-winning Ariel Dance Troupe, set to launch a US tour over Hannukah this year.

Prior to lunch, delegates made the traditional stop at the Lipsky Factory at the Barkan Industrial Park where Israelis and Palestinians work together. Professor Yishai Netzer of Ariel University offered an inside look into cutting-edge wine research at his lab in his literal field on the Ariel University campus. Netzer specializes in scientific research of strands of grapes that have grown in the region since Biblical times. He applies modern winemaking techniques to grapes that are indigenous to the region while also determining their genetic relation to popular grape species in France.

Leading up to home hospitality, AFA’s Avi Zimmerman offered insights into the founding and makeup of Ariel from a geopolitical perspective at the Ariel Regional Center for Performing Arts. It served as an apt introduction to learning about the make-up of Ariel firsthand.