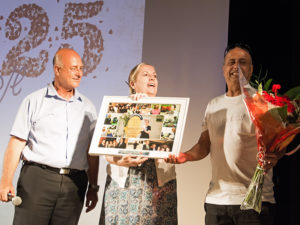 On June 29, the day of the ceremony, Victoria arrived in Ariel for a visit with Ariel’s mayor, Eliyahu Shaviro, and American Friends of Ariel’s Executive Director, Avi Zimmerman, and took a tour of the city.

The highlight of the visit was the silver anniversary ceremony itself – an evening of gratitude, stories, and reflection held at Ariel’s Arts and Sciences building. 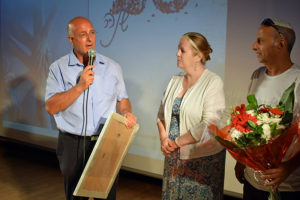 The organizers of the Silver Anniversary Celebration – Ariel University Social Work student volunteers and Sofi Pesok, the director of the Sheltered Workshop – opened the ceremony with many acknowledgments to the various city departments, donors, and organizations which have carried the Workshop to this point throughout the years. 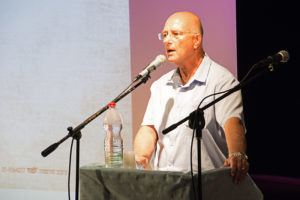 The Mayor then delivered opening remarks. He thanked the crowd for attending, Victoria for making the special trip to Ariel, and the members of the Randolph A. Hearst Sheltered Workshop for providing the positive environment which encourages participants to keep their heads up high.

“There is a big difference between someone who gets up and goes to work and someone who doesn’t get up in the morning,” he said during the ceremony. “I want to thank you […] for giving them a place to go.”

Mayor Shaviro then presented Victoria with a collage of photos from her previous visits, as a token of appreciation for her many years of dedication to the people of Ariel and to the Sheltered Workshop in particular.

After an intermission performance from three different dance ensembles from the International Folk Dance Troupe, AFA’s Executive Director, Avi Zimmerman, introduced Victoria and invited her to take the stage. 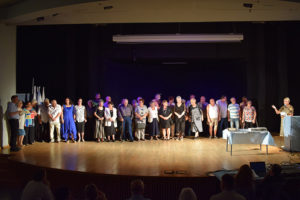 Victoria began by appreciating the performance, noting that she has been deeply involved with Christian theater performances and events, and that “I appreciate with Dora how difficult it is to put together and choreograph a show like that.”

Victoria then described how she has been involved with Israel since a visit with Dr. Billye Brim in 1996 – and how, the year after, she discovered Ariel and wanted to get involved.

“I thought in my heart, I want to help this city,” Victoria stated. “So I got Ron Nachman alone and I told him who I was and that I’d like to help this city as long as we have something to contribute to.”

The closing part of the ceremony included a group photo with Victoria and Sheltered Workshop members; the distribution of a booklet documenting the history of each Sheltered Workshop participant; and a screening of a short film about the participants. The ceremony ended with certificates of appreciation given to the workers of the Workshop and dedicated friends of the Workshop, as well as a heartfelt address from a few of the student volunteers present at the ceremony.

American Friends of Ariel and Mayor Shaviro thank Victoria for her ongoing support of the Sheltered Workshop and the City of Ariel.

To see more photos from the ceremony, click here.