We’ve had an exciting Spring Season here in Ariel – and we’ve had more visitors than ever before!

While we’ve had too many groups to list, here’s some highlights. 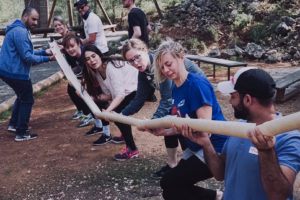 On March 5, a lively group of young adults from Bridges for Peace visited the Ariel National Center for Leadership Development (ANCLD) for a day full of confidence-building activities. Several members of the group later wrote to us with a lot of good things to say about their visit.

“The excursion in Ariel just showed me again how important it is to know when to be an individualist and when to work in a team,” Christopher Sinclair, 29, from South Africa, stated. “The team made sure our group was stretched beyond our

comfort, teaching us important leadership skills and values.  I enjoyed it very much overcoming obstacles with known and unknown (Israeli’s) personalities. In the end the obstacles were no match for our teamwork!!”

“I was interested in Israel and Jewish people since I was teenager so it was such a privilege to spend time with Jewish young people,” Yu Matsada, 25, from Japan, added. “As Christian, I would like to be a good friend with Jews and try building up good relationship for coming generations to help and encourage each other.”

Click here for more photos from our Bridges for Peace visit. This season, we’ve had a noticeable increase in interest in visiting Ariel’s Industrial Park.

In two months alone, we’ve hosted three different visits centered around the AIP: a group of Journalism students for an informative tour of the Noyman steel factory; a group of Young Judea – Year Course students on their gap year in Israel who visited Noyman and Frid Textiles; and a lively group of Chicagoans from the L’Chaim Center at the Achva Halva factory.

We’ve thoroughly enjoyed each of these visits and the thoughtful questions we’ve received from our visitors about coexistence and regional issues. 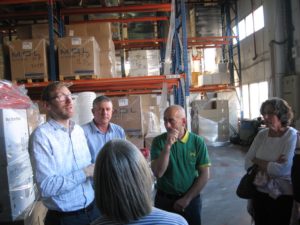 We had a special and insightful visit with dozens of Zionist Organization of America (ZOA) members in March, who were visiting Israel for their annual Purim Mission.

Undeterred by the Fast of Esther, the ZOA group enjoyed an insightful introduction to Ariel and regional issues, a tour of the Lipsky factory in Barkan, and a special visit at Ariel University with Mayor Eliyahu Shaviro and AU officials. They also visited the Ron Nachman Legacy Center and Ariel Pioneers Museum and paid respects to Ariel’s founding mayor.

We’re looking forward to seeing more of the ZOA this summer! 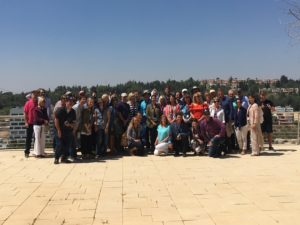 Following the Passover holidays, we were pleased to host over 100 people from the Christ Fellowship in Florida for a special lunch and tour of the ANCLD.

Mayor Eliyahu Shaviro addressed the group during the luncheon and emphasized how happy he was to see so many Israel supporters visit Ariel despite a tight schedule.

After a tour of the ANCLD campus – in perfect weather – and a briefing on their development plans, the group enjoyed a quick bus tour of Ariel.

We thank Christ Fellowship for taking the time to dine with us and hope to see them next spring!

As May began and the light spring weather ended, we welcomed 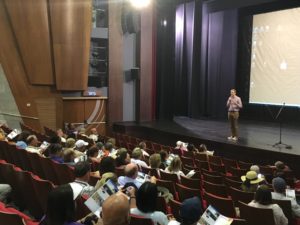 Maranatha Chapel of San Diego on their annual visit to Ariel. We were thrilled to host an especially large group – three buses! – and welcomed them with a special introduction to Ariel at the Ariel Regional Center for the Performing Arts.

Mayor Shaviro and Pastor Ray spoke during the welcome ceremony and, in one emotional moment, exchanged gifts and a hug. The ceremony was accompanied by fantastic performances from the Ariel Dance Troupes – a sneak peek of their upcoming performances in November for Ariel’s 40th anniversary events.

After the welcome ceremony, the groups split into a rotating tour of the Holocaust and Heroism Memorial Museum, the ANCLD, and a bus tour of the city.

We thank Maranatha Chapel for continuing to take so much interest in all Ariel has to offer.

We’re looking ahead to the summer season! Click here to see photos from all our 2017 visits.