Today, October 6, 2016, American Friends of Ariel completed an important project: collecting the signatures of thousands of people who support Ariel against the Boycott, Divestment, and Sanctions (BDS) movement and presenting them to Mayor Eliyahu Shaviro – who then showed the project to Prime Minister Binyamin Netanyahu.

Over 2,400 people signed our petition to support Ariel against BDS, with signatories from around the world.

We honored their commitment to the people and mission of Ariel with a beautiful hardcover book – “Build Bridges, Beat BDS: We support Ariel” – featuring their signatures and photos of some of our most-boycotted landmarks. 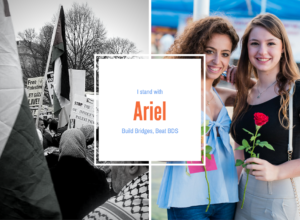 Cover of our anti-BDS book

Mayor Shaviro thanked the thousands of Ariel supporters for their support and for the book.

“Those who boycott Israel advocate segregation instead of coexistence,” Mayor Shaviro stated during the ceremony. “Ariel’s supporters around the world know the truth: that the only solution is working together to build bridges through educational, economic, and medical partnerships – and Ariel is on the forefront of that in Judea-Samaria and in Israel. We don’t talk politics; we work on the ground.”

Upon receiving the gift from American Friends of Ariel, Mayor Shaviro brought the book with him to his meeting with Prime Minister Binyamin Netanyahu, who expressed his appreciation for those who stand with Israel and the City of Ariel. 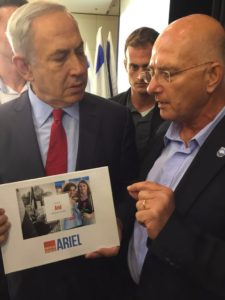 This book is being presented to Ariel’s Mayor, Eli Shaviro, as a tribute from the city’sfriends who recognize the role and significance of Ariel, the capital of modern-day Samaria. The names listed here represent thousands of people who support the fight against the Boycott, Divestment, and Sanctions (BDS) movement and asked that they be mentioned among Ariel’s supporters.

Ariel is a source of prosperity, not only for the local populace and neighboring Israeli communities, but for the Arab residents of the region as well. The Ariel Industrial Park employs thousands of Israelis and Arabs, Ariel University provides educational opportunities to students and faculty from all backgrounds, and the up-and-coming Ariel Medical Center will provide much-needed medical and health care to Israelis and Arabs alike.

Those who boycott Ariel push for tension instead of tranquility, they choose politics over people and they propose segregation instead of coexistence. Ariel’s friends and supporters know better. The thoughtful, concerned and caring people listed in these pages have chosen to make their voices heard. They speak for Israel, for truth and for justice. They join hands with Ariel, building bridges to beat BDS.

As Ariel’s friends proudly thank the city for all it does, Ariel respectfully thanks its dedicated friends in return.