Visitors flooded Ariel this summer to see the sights and get to know our city. Here are highlights from some of the many groups we hosted – come back soon!

Going for a swim with Billye Brim We were thrilled to see Billye Brim and our friends from the U.S. stop by Ariel on May 18-19, where they received honorary memberships to the Lowell Milken Family Sports and Recreation Complex and the Dr. Billye Brim Community Pool.

Later that night, the group saw a special performance from Ariel’s noted dance troupes at the Eshel HaShomron hotel. The next day, the group enjoyed a short tour before saying their goodbyes.

A visit from India 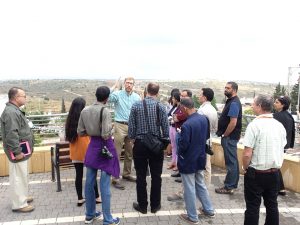 The American Jewish Committee brought an Indian delegation of journalists and diplomats to Ariel on May 24, where they saw the area with their own eyes and toured Ariel’s brightest hotspots.

Twelve participants began their day with a visit to Ariel’s Performing Arts Center to learn about the center’s victory over the Boycott, Divestment, and Sanctions (BDS) movement. The group then enjoyed a tasty – and informative – visit to the Achva Halva factory before visiting Ariel University.

Performance and Pizza with the Internationals 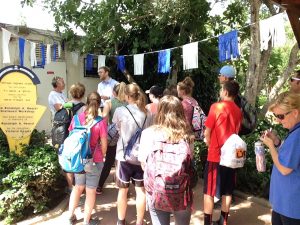 We welcomed the Faith Bible Chapel youth group to Ariel on June 1-2 for an in-depth tour of our city. Highlights included a visit to the Holocaust and Heroism Museum and a stop at the Randolph A. Hearst Sheltered Workshop. After a driving tour and a stop for lunch, the group visited the Brenda Wygant Memorial Vineyard – then traveled up the hill for a stop at the Ron Nachman Legacy Center and Ariel Pioneers’ Museum. The group then learned about Biblical values and team dynamics through leadership activities at the Ariel National Center for Leadership Development. 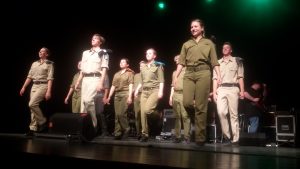 The Internationals wowed all of us with their show at the Ariel Regional Performing Arts Center for IDF soldiers and local schools – before stopping at the Ariel Young Adults’ Center for a pizza lunch. After the fun-packed morning, the group toured the Ariel Industrial Park, the Brenda Wygant Memorial Vineyard and the Ron Nachman Legacy Center and Ariel Pioneers’ Museum.

An eye-opening visit for J-Street U

Ariel hosted a student group from

Bina Secular Yeshiva in Tel Aviv on June 7, on a J-Street U Israel-sponsored trip to the region. The J-Street students began their eye-opening visit with a stop at the Ariel Young Adult Center to learn about Judea and Samaria and discuss current events.

After a brief stop at the lookout point outside the Ariel Regional Center for Performing Arts, the students traveled on to see Israeli-Palestinian coexistence in action at a factory in Ariel’s Industrial Park. The visit ended with a lively discussion and face-to-face meeting with Ariel University students and a wrap-up session at the Lowell Milken Family Sports and Recreation Complex.

Chapel’s young adult delegation stopped by Ariel’s Young Adult Center to learn about the city and Judea and Samaria. There, they met our intern, Tom, and the group headed off to the Youth Center for team-building activities and a barbecue.

We were joined by Maranatha Chapel’s teen delegation four days later, who started their day early with a discussion about Ariel at the Ron Nachman Legacy Center and the Ariel Pioneers’ Museum before heading off to the ropes course at the Ariel National Center for Leadership Development.

On June 21, the Zionist Organization of America (ZOA)’s student delegation visited Ariel for a morning of insight and hands-on learning. The day began with a briefing at the Ariel Young Adults’ Center.

After a stop at the Ariel Regional Center for Performing Arts, the group visited the Ariel Industrial Park to learn about industry and see Israeli-Palestinian coexistence in action. 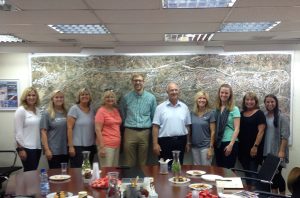 Seven women from Hoover, Alabama made an extra-special visit to Ariel on June 28-29, for an intensive tour of the city to really get to know the region and the people.

We kicked off the visit with a special welcome from Mayor Eli Shaviro at the municipality. Mayor Shaviro welcomed the ladies to Ariel and spoke to them about the new educational and industrial development projects in the city.

We then toured the Randolph A. Hearst Sheltered Workshop, and spoke to the incredible project coordinators and caretakers who run the center, Dubi and Sofi. 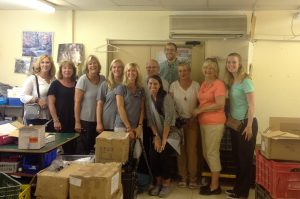 Both explained the electronics projects the participants drive forward on a daily basis, while we saw the Workshop in action.

After a brief lunch at the commercial center, the ladies visited the Ron Nachman Legacy Center for a talk about Biblical Samaria before taking the Leap of Faith at the Ariel National Center for Leadership Development. That evening, American Friends of Ariel sponsored a special evening where the ladies were able to spend quality time with members of the Sheltered Workshop before enjoying a performance from the Seniors’ Choir and a young immigrant from the US.

The visit was no less action-packed Wednesday.

The ladies began their morning with a special introduction to our interns, Tom and Nicole, at the Ariel young Adult Center. Tom and Nicole described the dynamics of spending an extended period in Israel and how meaningful their time has been compared to a brief tour of the city – and we discussed how visitors can take the experience home with them.

We then headed off to speak with Irena at the Holocaust and Heroism Memorial Museum to get to know her and relive her story. Following a brief tour of Ariel University’s wineries, the ladies then enjoyed lunch with Oriya Shaviro before saying their goodbyes.