On Sunday, January 17, 2016, the Ron Nachman Legacy Center and Ariel Pioneers Museum was dedicated. The Hebrew date was 7 Shvat, the third anniversary of the late Ron Nachman’s passing.

Ron Nachman, Ariel’s first and founding mayor, was laid to rest atop the Ariel National Center for Leadership Development, overlooking the city’s residential neighborhoods. The picturesque location, the Nachman family thought, was the perfect spot for a memorial site that would honor Ron’s legacy and celebrate Ariel’s ever-developing history. Shortly thereafter architectural plans were drawn up. A Friends of Ariel donor agreed to finance the project on two conditions. The first was that only Ron Nachman’s name would appear at the site. The second was that the donor’s identity remain anonymous.

The project’s timeline was exceedingly tight, yet thanks to the Mayor Eli Shaviro’s drive, the continuous work of Dorith Nachman and the donor’s untiring commitment, the site was completed as planned. 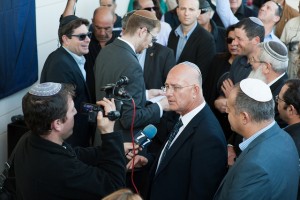 To the surprise and delight of the guests, January 17 turned out to be a warm, bright and pleasant spring day in the middle of winter. The crowd first assembled opposite Ron’s grave, shaded from the sun by the new outdoor structure erected in his memory.  Amos Tzuriel, Director of Ariel’s Religious Council, conducted the traditional memorial ceremony. Psalms were recited by Dorith Nachman, family members, Ron’s close friend Dr. Mudi Tomarkin and Mayor Eli Shaviro. Dan Nachman, Ron’s brother, said the Kadish prayer, and Rabbi Shalom Tzadok delivered the prayer of E-l Maleh Rachamim.

Following the memorial service the event continued with the dedication of the Ron Nachman Legacy Center and Ariel Pioneers Museum, emceed by Friends of Ariel Executive Director, Avi Zimmerman. “Distinguished guests, you are assembled at a multi-purpose complex that serves to commemorate the legacy of Ron Nachman and to honor the work of Ariel’s founders. The site’s amphitheater is located at the eastern end, facing residential neighborhoods and Ariel University, allowing visiting groups to observe the city’s past, present and future. Here, at the midpoint of the site, is the visitors’ plaza, designated as a tribute to Ron. Located at the western end is the “Ariel Pioneers Museum”, designed to host and educate groups and individuals of all ages from Israel and abroad.”

that covered the site’s sign. Pastor Ray Bentley from San Diego, Dr. Robert Mawire from Texas, Bruce and Heather Johnston from Alabama and the Ginnie and Sarah Johnson from Texas continued by unveiling the English sign. The mezuza was then affixed to the doorpost, followed by the celebratory ribbon-cutting by Mayor Shaviro, Dorith Nachman and government officials.

Once the crowd gathered indoors, Mayor Eli Shaviro opened by paying tribute to Ron Nachman’s lasting contributions to Ariel and recognizing the work of the city’s founders. Representatives of the Israeli government, Minister of Science and Technology, Ofir Akunis, Minister of Immigrant

Absorption, Ze’ev Elkin and Deputy Minister of Defense, Eli Ben-Dahan shared with the audience both their awe of Ron and his accomplishments, as well as personal anecdotes about their relationships with him. 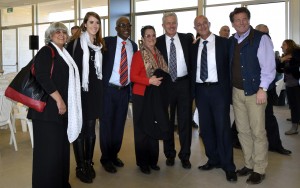 Friends from abroad attended the ceremony as well, some in person and others via technology. Rabbi Paul Plotkin of Florida recorded a video about Ron and his unmatchable persona. Ms. Sharona Justman of Los Angeles, Chairperson of American Friends of Ariel, spoke of her appreciation for Dorith Nachman’s untiring dedication to Ron over the years, and thanked Mayor Shaviro for seeing the City of

Ariel through its coming stages of success. Sarah Johnson sang a song that she, a young Christian from Texas, composed in honor of the people of Israel who have returned to their homeland.

One of the day’s highlights was a brief tribute film honoring Ron Nachman, prepared by the Milken Family Foundation in cooperation with the Pioneers Committee. The Hebrew version was screened at the event, moving the crowd to tears. Ron’s daughter, Anat Nachman Natan, then spoke on behalf of her sisters and their children. The final speaker was, of course, Dorith Nachman. She spoke of how much she missed her husband, and how pleased she is with the completion and dedication of the new site. She expressed her sincere thanks to all those involved in the process, from Mayor Shaviro to the Committee, from family members and close friends to the anonymous donor.

At the conclusion of the event Avi Zimmerman added, “This project has only just begun. This site is for the People of Ariel and the city’s visitors, providing accurate historic information about Ariel’s genesis as a community and as a city. The Pioneers Committee is currently collecting and organizing the city’s archives so that they can be made available and user-friendly to the general public. This is a unique opportunity for local residents to play an active role in chronicling Ariel’s unique story. This Museum is a gift to Israel’s heritage, welcoming visitors to step into our story.”