A Teen Mission from Maranatha Chapel in San Diego spent two days in Ariel at the end of June. While in the city, the teens toured Ariel, visited the Center for Performing Arts and the Holocaust Remembrance Museum, where they were received by museum owner/director Irena Wodzislawski. The American youngsters also enjoyed a delightful dance performance by Ariel’s International Folk Dance Troupe, whose choreographers, Dora and Masha Litvack and dancers have been hosted several times by the Maranatha community. 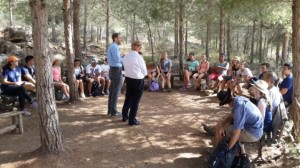 The teens met with Mayor Eli Shaviro at the Ariel National Leadership Development Center where they had the
opportunity to experience leadership training firsthand. They were so enthused by the activities that they would have liked to stay on. The Youth Leadership Center is a municipal project in partnership with JH Ranch Israel.