On his first USA tour as Mayor of Ariel, Eliyahu (Eli) Shaviro had several goals. For starters, he set out to meet the many friends of Ariel who have lent their support to the city throughout the years and to thank them for always being there to help meet the needs of the residents of Ariel. Second, he sought to share his vision for Ariel and the 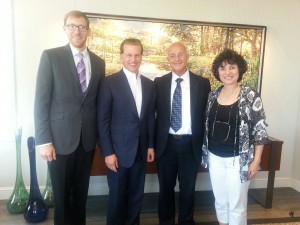 future of the city with friends, both new and old. Finally, Mayor Shaviro anticipated an opportunity to invite our friends to continue to step into the Ariel story, as we continue to build upon our growing partnership.

The first stop on the Mayor’s itinerary was South Florida. There, Mayor Shaviro, accompanied by Executive Director Avi Zimmerman, was warmly received by longtime friends of the city like Michael Greenberg, Harry Posin and Brian Sherr, who founded American Friends of Ariel, special friends Gail Neer, Linda Siers and Dr. Amir Baron and generous supporters like Norman Braman, Gary Gerson and Cherna Moskowitz. The Mayor was moved by how concerned these friends are about the people of Ariel and how strong their commitment to Ariel’s future remains. With a major citywide educational reform in Ariel at the top his priorities, Mayor Shaviro invited the head of the city’s educational department, Ilana Nulman, to join him for a number of key meetings in the New York area and the West Coast. Among those were a community luncheon organized in Philadelphia by Michael Adler, legal counsel for American Friends of Ariel, a discussion on the status of education in Ariel with one of the city’s foremost American partners, Lowell Milken, a tour of the Milken Family High School with its educational director Metukah Benjamin, meetings with special friends Larry and Lisa Field and so much more. ho want to lend their support to his young and dynamic city.

In Texas, the mayor met with many of Ariel’s longtime supporters and some newer ones at a variety of events organized in his honor by special friends Ginnie Johnson, Pamela Day, Pastor Robert Mawire and Tom Doyle. Eli Shaviro addressed the current issues of the day, his plans for Ariel and the importance of knowing we have dedicated friends abroad. The Mayor’s tour ended on a high note with a visit to Pastor George and Cheryl Morrison of Faith Bible Chapel in Arvada, Colorado, a community that “adopted” Ariel almost 20 years ago. The special relationship that exists between FBC and Ariel has included annual visits, hosting groups from each other’s communities, support for special needs in Ariel and so much more. Mayor Shaviro was very pleased to spend the day with these wonderful friends.

“Beyond all I had heard about our American friends over the years, this trip was a real eye-opener for me,” said Mayor Shaviro. “I feel truly blessed to be leading a community that so many people are involved in and care about. They are willing to share in my vision for Ariel and become real partners in growing and developing this city. The trip could not have been a better experience for me.”