When dance teacher Dora Litvak came with her husband and young daughter from Moscow to Israel in 1991, she didn’t plan on teaching dance in Israel, let alone creating an Ariel icon.

The Ariel International Folk Dance Troupe she directs with her daughter, Masha, recently took home top prizes at a national dance competition, following a highly successful tour of the United States during Hannukah. With performances that tell the story of Ariel and Israel through powerful choreography, the Troupe will be celebrating 20 years on June 25, 2014 with a dance extravaganza.

In Russia, dance is an indelible part of the culture, with a high demand for teachers who don’t settle for anything less than award-winning performances by their students. Despite the influx of Russian immigrants well-versed in the arts in the early 1990s, Ariel, like its new pioneers, was concerned first with laying the material foundations for life. Culture would come with time.

“I had difficulty starting out here,” Dora, 60, related to Ariel Development Fund at the office in Israel, sitting next to her daughter, Masha, 26. “I had a lot to deal with. I had to learn a new language.”

Fleeing Russian anti-Semitism, the Litvaks settled in Ariel mostly for the mild weather. The Ariel International Folk Dance Troupe was born with no planning and much surprise.

Dora took a course at Ariel University (still a college at the time) for early childhood studies and became a kindergarten teacher at a local day care center. She offered to teach folk dance to the kids as a fun activity. One day, Nina Furman, a parent who happened to work at the aliyah department of municipality, came to pick up her child and was impressed by the result. She gave Dora a room to use for a real class. 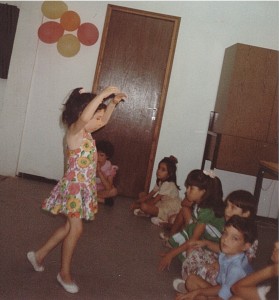 “When my mom opened the class, I joined until I was 12 years-old.” Today, Masha is the lead choreographer, with her mother providing some finishing touches. An orthopedic problem has prevented Masha from dancing herself; she vicariously dances through their students.

The first thing people notice about the performers is their huge smile, making the dances seem effortless despite the discipline they require.

“That’s how they taught us in Russia.” Dora said, noting that, “every nation has its own smile. Some are more proud, some are more modest, some more playful. We explain the nature of each country when they learn a dance.”

Today, the Ariel International Folk Dance Troupe is comprised of 90 students, from children to adults.

“For the students, it’s a part of life. They help with everything. They always invest in it. They do holidays together.” Parents, too, are actively involved.

Dora has found more than just a career in Ariel. She founded a community, for herself and the generation of dancers she is teaching. Dora lets a smile seep in through her stoic countenance. “It became my family.”

CLICK HERE TO DONATE TOWARDS THE 20 YEAR ANNIVERSARY CELEBRATION