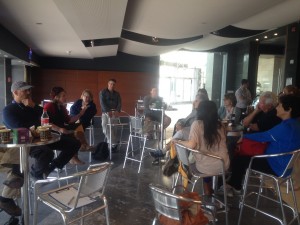 Rabbi Leon Morris of Temple Adas Israel in Sag Harbor, New York understands that the real “attractions” of Israel are the people who live here – the Israelis. He plans to become an “Israeli” this summer when he makes his home in Jerusalem. It is thus understandable that the delegation he led to Israel this month asked to meet with the Ariel locals to expand their understanding of life in Samaria.

After a brief introduction at the Regional Center of Performing Arts, the delegation split up into groups at the Center’s café to meet with Ariel’s treasures: its diverse residents. Over coffee and cake, they met with a native Israeli, a Russian immigrant, and three olim from the US. The visit was facilitated by the Yesha Council, with its representative Lital Alfassi also on hand to share and answer questions.

The native Israeli, Oren, works as the park ranger at the Ariel National Center for Leadership Development, leading groups in its outdoor training exercises. Having grown up in Ariel, he provided insights into its development from a start-up community to the city it is today.

Masha Litvak, the director/choreographer of the Ariel Dance Troupe with her mother, Dora, spoke of her aliyah to Ariel from the former Soviet Union.

Three American-Arielenos spoke of their transition from the US to Ariel. Isaac, originally from Monsey, lives in Ariel with his wife and four children and works as a psychiatrist. Ariel newbie Tova, a reporter, made aliyah from Chicago with her husband. Orit from Los Angeles provided insight about the move from “Hollywood” to Ariel.

Fans of reality television were in for a treat when it was discovered that the delegation had its own “star” on board: Jackie Gordon Kline. Jackie was a crowd-favorite contestant on the 2011 Bachelor series. She came with her husband of six months, Marcus, for their first trip to Israel to strengthen their Jewish roots and understanding of a different kind of “reality” show that takes place across television screens across the world.

The geopolitical “realities” of Ariel figured into much of the Q&A of the group, with residents asking about co-existence with our Arab neighbors, the social make-up of the city, and what residents would do in the event of an evacuation threat. While residents differed in their views, all shared the vision of a thriving city that will forever remain an integral part of Israel.

When the visitors were asked their impressions of Ariel, one responded by saying he admires the residents’ bravery for living in Israel. But through their stories, the residents communicated that they don’t see themselves as brave, but as privileged to live in such a progressive, rich, and beautiful city.