On the heels of the Academy Awards, a different kind of film history was made in Tel Aviv on March 5, 2014 when graduate films of Ariel University‘s Film/TV track were given awards at a festive screening at the Tel Aviv Cinemateque. These rising stars are on the forefront of filmmaking that grapples with ever complex Israeli—and human—realities.

Eight student films were showcased at this annual event, with awards and prizes offered in four different categories and winners selected by a committee composed of Ariel University instructors and professionals in the film/TV world. Guest of honor, Arnon Zadok, acclaimed Israeli actor and director, addressed the graduates, saying: “There’s no more difficult or beautiful place to be than filmmaking.”

And the winners are:

Best Picture “Nahala (Inheritance)” –  A documentary by Chen Klein following her internal and physical challenges making her home in a caravan on a Samarian hilltop. Click to view trailer.

Best Cinematography, Direction and Production & Crowd Favorite “Taba’at Nafla (The Fallen Ring)” – A film noir by Shachar Shooker in which a wedding ring sends a man on an anguished longing for a lost love. Click to view trailer. 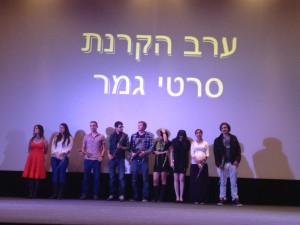 The Film/TV Track at Ariel University’s School of Communications is a three year academic program culminating in a BA.

“We are pleased with the ever-increasing caliber and diversity, both in content and form, of our graduate films, as well as the steady recognition they are receiving in festivals worldwide,” said Eyal Boers, head of Ariel University’s Film/TV track.

Friends of Ariel began its valued working relationship with the Film/TV track when it showcased “Ariel Breakfast Club” at the 2011 Israel Film Festival in Los Angeles. The series of three student films follows unexpected encounters between students of different religious, socio-economic and political backgrounds, and it continues to make to festivals, including most recently the March 2014 Jewish Arts and Film Festival in Stamford, CT. “In Israel, challenges breed creativity,” states Avi Zimmerman, Executive Director of American Friends of Ariel. “Israel is where disparate elements across international societies converge; East and West, traditional and post-modern, liberal and conservative, religious and secular–you name it, we got it. Our students are creative forerunners, unabashedly exploring the delicate nuances that characterize all walks of life in Israel.”

A special thank you to Ruth Brandt of Los Angeles for providing student scholarships for each of the films.