As part of a weeklong study tour of Israel, with a focus on Judea & Samaria (the “West Bank” as they referred to the region), two dozen Danish journalism interns spent the afternoon in Ariel to receive an Israeli perspective to the Israeli-Palestinian conflict. Most are completing their internship at the prestigious Berlingske newspaper and media house, and while not all will focus on the Middle East, they came to deepen their understanding of a region that continually makes headlines.

They started their tour at the Ariel Center for Performing Arts, where they received background on Israel’s founding and asked questions about Arab-Israeli relations, security, and the makeup of Ariel.

They got to see firsthand the potential for coexistence at the Lipsky Factory at Barkan Industrial Park where the CEO, Yehuda Cohen, firmly believes that his factory brings hope to the region. Palestinian Arabs and Israelis work side-by-side, in a spirit of equality and mutual respect, to earn their livings with honor. Any peace deal, he said, must treat industrial parks as sacred grounds for fostering peace. Further, they learned how boycotts of the region specifically harm the livelihoods of Palestinian Arabs who depend on Israeli factories for gainful employment. 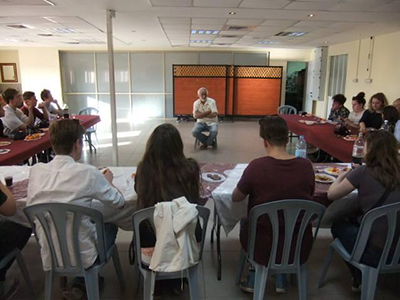 The humanitarian consequences of transferring Jewish populations were heard about firsthand—in Danish–with a visit to the Netzarim trailer camp housing refugees from the Gaza Strip. Moti Izaak, one of the community’s representatives who grew-up in Denmark, discussed for about an hour his reasons for moving to Israel and the consequences of withdrawing from land.

At Ariel University, Yigal Cohen-Orgad detailed some collaboration with Palestinian and Danish researchers on life-saving health research whose funding is curtailed due to politically-motivated boycotts on any educational institute past the Green Line.

We trust that the Danes emerged with a fuller picture of life in Judea and Samaria so that they are better equipped to provide an accurate and balanced account of the Israeli-Palestinian conflict, should they follow that course. We wish them much luck in their careers.