Executive Director Avi Zimmerman explaining how relations between our Arab neighbors, especially the nearby town of Salfit, were once friendly until the violent Arab uprisings of 1987 and 2000

After enjoying lunch at a nearby winery in Samaria, a delegation from the Jewish Federation of Cincinnati, Ohio stopped by Ariel on November 14, 2013 to get a briefing on the founding of Ariel and its role today in fostering a just peace. Ariel enjoys many friendships in Cincinnati, where a benefit for Friends of Ariel took place earlier this year.

At the Ariel Regional Center for Performing Arts, the group received an overview of Ariel’s history as a strategic community protecting Israel’s narrow waistline. They then stepped out onto the balcony for a view the Ariel National Center for Leadership Development in the surrounding hills. The state-of-the-art outdoor training center serves as an example of Jews and Christians partnering for the betterment of value-based leadership in Israel. The tour concluded with Q & A about Ariel’s role in shaping the geopolitical landscape and Arab-Israeli relations, with Avi Zimmerman. 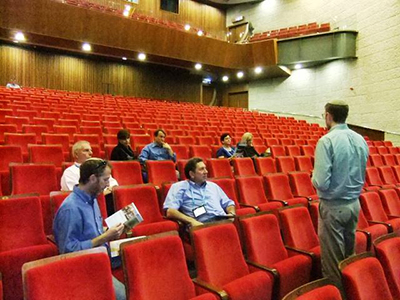 We are glad that Ariel was given the opportunity to strengthen its friendship with the Jewish community of Cincinnati and we look forward to their return.