Leading up to the 2013 General Assembly of Jewish Federations of North America in mid-November, a delegation from Jewish Federation of Boca Raton visited Ariel. For most, it was their first time crossing the Green Line to understand firsthand the geopolitics of a region that holds the key to Israel’s future.

The delegation learned about the realities and prospects for real peace and co-existence between Palestinians and Israel at the Lipsky Factory at the Barkan Industrial Park, which treats Jewish and Arab employees with equality. A bus tour offered them a look at the landscape and how Jewish and Arab communities form a delicate patchwork of neighborhoods. 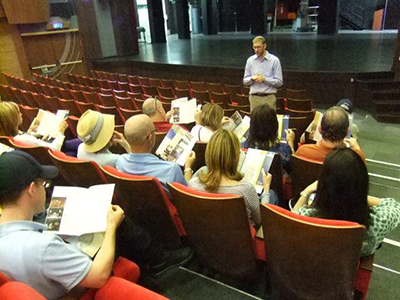 On the balcony overlooking the neighboring Arab town of Salfit, he explained how relations between our Arab neighbors were once friendly until the violent Arab uprisings of 1987 and 2000. Still, business binds Jews and Arabs together today, with most Salfit residents finding employment at nearby Israeli factories.

The tour concluded with a bus tour through Ariel, with stops at the makeshift caravan community for Jewish evacuees from Gaza in 2005 as well as Ariel University.

We are glad that Ariel was given the opportunity to strengthen its friendship with the Jewish community of Boca Raton and we look forward to their return.