Dani Menkin‘s first day of class at Ariel University was full of love. “39 Pounds of Love” to be exact.

To kick off his documentary workshop with an appreciation for practice as much as theory, he and Eyal Boers, head of the Film & TV track at the Moskowitz School for Communication, held a special screening of Menkin’s internationally acclaimed documentary “39 Pounds of Love,” which won the Israeli equivalent to the Academy Award.

And the 50 film students in attendance loved how they got to spend the morning watching a movie that inspires people to chase their dream, followed by live insights from the director.

“It’s an opportunity for us to get to know each other,” Menkin said during the Q & A following the screening. 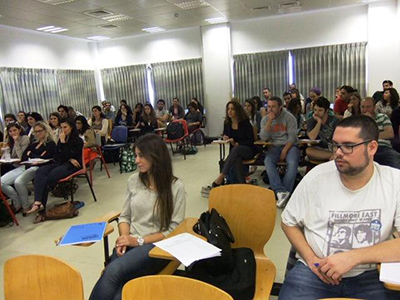 “39 Pounds of Love” tells the remarkable story of 34-year-old Ami Ankilewitz, who was born with Spinal Muscular Atrophy. The doctor warned his family that he wouldn’t live past the age of six. Weighing only 39 pounds, his entire body paralyzed except for one finger, Ami’s love for life propelled him to live far beyond the doctor’s grim prognosis. The film documents his cross-country US road trip in an RV to find the doctor to tell him that life doesn’t have an expiration date. Menkin and his crew became characters in the story—and Ami’s friends.

“The boundaries between the creator and protagonist of the documentary are totally blurred,” Menkin responded during the Q&A. Ami’s charisma and positive personality made him very popular. His best friend, Asaf Shaul, was also on hand at the screening to answer questions. Ami passed away at age 41 earlier this year, but, thanks to the film, he has become, in a sense, immortal. “One thing about documentaries is that you can make someone eternal,” he said.

Menkin has served as an instructor at American universities and a guest lecturer at Israeli schools, but this is the first time he is teaching a full academic course in Israel. What drew him in part to Ariel University was the location. He was attracted to the City of Ariel both for its unique geopolitical position and its suburban character — a contrast to his metropolitan Tel Aviv life.

“I came to visit the university and students, and I felt they’re not only great students with great facilities, but that they have great access to good stories,” he said over hummus at Ariel’s Abu Dushi Hummus, co-operated by an Israeli and Palestinian—already a good story, Menkin noted.

“I’m excited to see what stories will come out of the class.”