It is our pleasure to share Ariel’s recent election results with you, our friends, across the globe. It’s important to understand how the residents of Ariel rose to the challenge in choosing a new leader following the passing of Ron Nachman.

As our new mayor, Eli Shaviro continually points out that no individual can replace Ron Nachman, and our challenge is to build upon everything that he established. We invite you to read about Eli Shaviro’s recent victory. Click here to understand how Eli’s victory was a triumph of community.

Mayor Eli Shaviro planted roots in Ariel in 1987. He has held senior positions in the IDF, leading him to head the Security Department of the

Ariel Municipality from 2003-2007. Following this post, he served as the CEO of the local council of the nearby township of Oranit. He holds an MA in Business from Ben Gurion University and a BA in Political Science from Tel Aviv University. Upon Mayor Ron Nachman’s passing in January 2013, he was selected to serve as acting Mayor. In October 2013, he was officially elected as Mayor in a landslide victory. 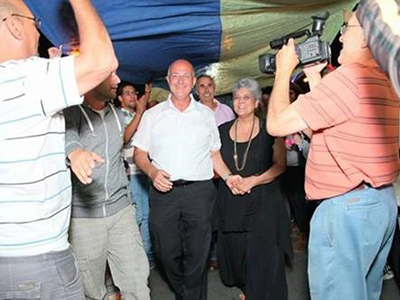