The Olive Tree Initiative, a university-based organization that promotes conflict analysis and resolution through experiential education in Israel, made another perennial visit to Ariel on August 4 to balance its studies of Judea and Samaria, which included visits to Bethlehem, Hebron, Ramallah, and Jenin. The OTI missions, a multi-ethnic group that includes Jews and Muslims, spend about two weeks in Israel and meet with personalities who address the gamut of viewpoints relating to the Israeli-Arab conflict.

Led by Isaac Yerushalmi, Executive Director of the Center for New Diplomacy, this past mission 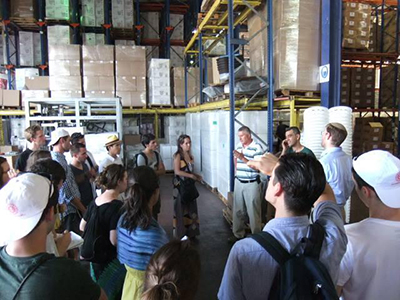 The visit to Ariel is designed to enhance their understanding of the delicate fabric of life in Samaria and the role the city plays in moving forward conversations about regional coexistence. The tour focused on opportunities for fostering peace through the development of relationships between Jews, Israeli Arabs, and Palestinians.

On their way to the city, Executive Director of American Friends of Ariel, Avi Zimmerman, pointed out the significance of the olive trees 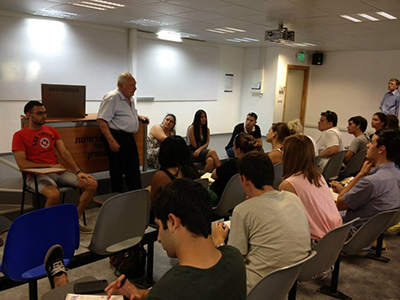 dotting the landscape around Ariel. Cultivated land, by Israeli law, is presumed to have an owner, regardless of when or how they were planted. Ariel was built on Jabal Mawat, “The Mountain of Death,” named such because Arab locals believed the rocky land could produce no fruit. The founders of Ariel were careful to build on the ownerless land, and OTI delegates got to learn firsthand how the “The Mountain of Death” turned into a spring of life, culture, and education.

The mission’s first stop was the Lipsky Factory at the Barkan Industrial Park where delegates had the opportunity to meet with CEO Yehuda Cohen and one of the many Palestinian employees. Through translation, Haytham discussed his working conditions, the attitudes of his neighborhood towards his work at an Israeli factory, and his future at a factory located in a contentious area.

“This factory gives hope for the region,” Cohen said, pledging to maintain the factory’s operations, whether or not it remains under Israel’s jurisdiction.

Students engaged with Israeli students at Ariel University, including Shaifrom Ariel; Liz, an olah (immigrant) from San Francisco; Nasim from Nazareth, the Arab capital of the Galilee; and Wassim, from the Arab town of Tira. They fielded questions about their decision to study at Ariel University and interpersonal relationships between Arabs and Jews.

“I get along better with Jews,” said Wassim, a third year student in civil engineering. He and his Jewish friends interact both academically and socially, going to each other’s birthday parties and homes.

The warnings Nasim received from his Arab peers about tensions he would encounter at an Israeli university went unfounded.

“It feels like a family,” said Liz, who transferred to Ariel University from Jerusalem and who happened to know some students on the tour from high school.

“I wanted to study at a new university,” said Shai, who majors in criminology and political science. “You’re part of its growth; there are fewer rules and taboos.”

University Chancellor Yigal Cohen-Orgad joined the group and discussed attempts of the Palestinian Authority to prevent collaborations between the University and the neighboring Palestinian population. Palestinian officials fear such normalization would grant legitimacy to the settlement enterprise.

The afternoon concluded at the Ariel Regional Center for the Performing Arts, where Zimmerman offered insights into the founding and makeup of Ariel from a geopolitical perspective. As is often the case with politically-oriented student missions, the delegates were eager to determine the best policies for achieving peace.

“It’s not arithmetic, it’s calculus,” Zimmerman said, explaining that the multilayered conflict cannot be solved by one versus two-state formulas. Peace comes from uplifting humanitarian conditions for all in the area.