Bill and Brenda (Beni) Johnson are the Senior Pastors of Bethel Church in Redding, California. A fifth-generation pastor, Bill travels extensively on 6 continents around the world as a conference speaker. Beni is in charge of the Bethel’s Prayer House and ministry teams. Her insight into strategies for prayer and her involvement in prayer networks have helped to bring the much-needed breakthrough in Bethel’s ministry. Both Bill and Beni have authored a number of books, including When Heaven Invades Earth, Dreaming with G-d, and Strengthen Yourself in 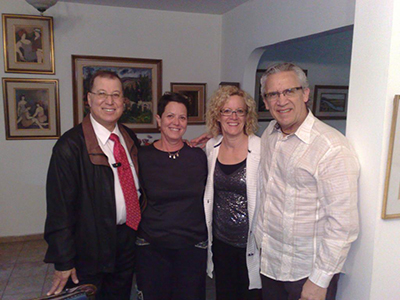 the L-rd. Together, they serve a growing number of churches, including their own Bethel Church, and they have a vibrant, thriving School of Ministry with over 1,200 students enrolled from more than 370 countries.

The Johnsons made the trip to Israel so that they could visit with Mayor Ron Nachman. They were told of Mayor Nachman’s vision and success in establishing and developing the city of Ariel, and they wanted to see what the living legend was all about. As Pastor Bill reiterated over the course of his visit, “this is an amazing story. There are a lot that people can learn from you [Mayor Nachman]”. After lunch at the Café-Café restaurant, located in the Lowell Milken Family Sports and Recreation Complex, Mayor Nachman took the Johnsons for a tour of the city. They enjoyed visiting the Ariel National Leadership Development Center, as the Johnsons educate their students to embrace leadership values. Heather Johnston, who was instrumental in arranging the visit, was pleased to share the Israeli version of the “JH Ranch” with the Johnsons. The Johnsons were similarly impressed with the new Ariel Regional Center for the Performing Arts. The beauty and design of the structure point to Mayor Nachman’s broad vision, balanced by his attention to detail. Pastor Bill acknowledged his admiration, saying “it’s important to do things with excellence”.

The visit was enjoyed by all. The Johnsons were thoroughly entertained by Mayor Nachman’s uncompromising sense of principal and his unabashed vocalization of his views. Pastor Bill repeatedly chuckled and said, “I like your style”.

At the close of the visit, Pastor Bill encouraged Mayor Nachman to write an autobiography, so that others can learn from his formidable example. Mayor Nachman responded that a number of people have approached him with the idea. He may take them up on their suggestion.